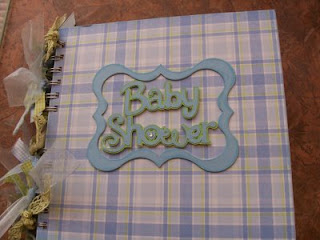 Nov, '07 Instant Baby Shower album
One of my favorite things to create is an instant "on location" scrapbook. The idea is that you create the memory book at the event as it unfolds so that the album is ready and can be viewed as the event is ending.

The first one I ever did was a bridal shower recipe and advice scrapbook. This was years before I actually started scrapbooking, but the idea was essentially the same as what I do now. For that surprise shower I gave the guests index cards before hand and asked them to share a favorite recipe (if you do this, make sure your guests do *not* write on the back of any of the items you give them --instead give them "extra" cards to continue their writing on). I also gave out large die cut hearts and other shapes for them to record any advice they wanted to share with the bride-to-be.

At the shower, I set up a work area beyond the view of the guest of honor where I could assemble the instant album. As I mentioned this was pre-scrapbooking days so this particular album was created using a magnetic "cling" photo album (eek! not photo safe). Anyway, I added stickers and embellishments to the recipe cards and inserted them into the album along with Polaroid photos we were taking throughout the shower. As much as possible. I tried to keep advice and recipes together with photos of the guest who had provided them.

When the album was done, I popped it into a pre-wrapped box (the type where you wrap the top and the bottom so that you can easily open and close it) and we placed it strategically on the gift table so that it was the last gift opened. I really can't describe what an impact this sort of gift has, but suffice to say that these are always a big hit. 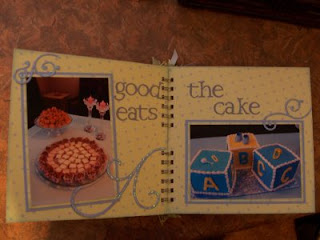 Nov, '07 Instant Baby Shower album - inside
Now that I've become a more experienced scrapper, I've decided to add Instant Scrapbooks as a service available from PaperCraft Princess. These days I no longer use cling albums or Polaroid cameras... instead I bring a small photo printer with me and custom pre-made albums. The results are quite effective.

Here are a few snaps from an "instant" album that was put together at a baby shower today. This is the book before adding photos: 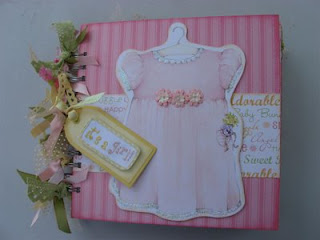 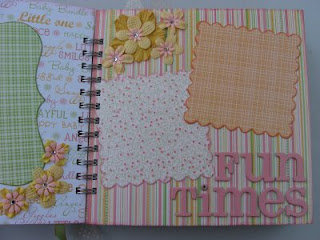 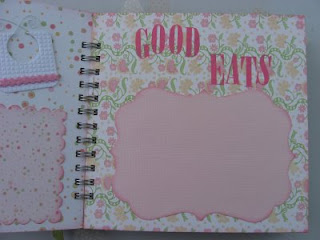 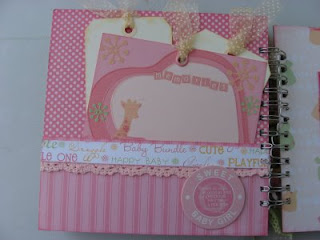 And some snaps of the mommy-to-be and guests looking at the completed album: 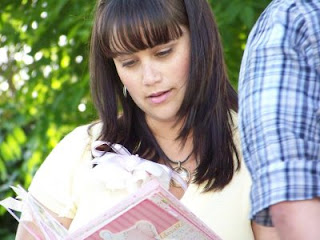 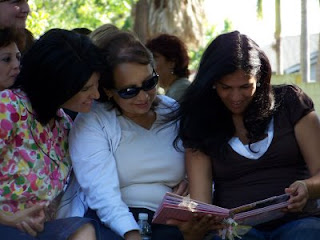 What a great idea!!
I've tried a few times to get a few pictures of a wedding or shower into a gift album, but never a complete album ~ AMAZING!! Love the idea and I'm sure the Mommy-to-be did too!!
Lovely album ;-)

I’ve been scrapbooking for over ten years now. What started as a little hobby grew into more of a passion over the years. I’ve had the privilege of having some of my layouts published in scrapbooking idea books. In 2006, I started teaching papercrafting classes and soon found out that teaching is what I love to do best.

I'm currently teaching classes in scrapbook stores in the Los Angeles area, as well as the private classes taught through PaperCraft Princess.

You can reach me at: infoDOTpapercraftprincessATgmailDOTcom (be sure to replace the capitalized words with the appropriate punctuation)

My resume
An online gallery of my work
My personal blog

Promote Your Page Too

PaperCraft Princess is a traveling scrapbook boutique --a mini store of scrapbook basics that comes to you! Along with our papercrafting wares, we also bring fun make-n-takes (quickie classes) to your location in the greater Los Angeles area.

We can also vend your crop, retreat or other scrapbooking event.

In addition to our papercrafting "roadshow", we offer private consultations, scrap-for-hire services and on-site instant scrapbooks for special events.

Stay updated on PaperCraft Princess news by joining our email newsletter list, using our "find us" links or following this blog (all listed below).